What a trip! The weather stays unusually cold most of the way as we continue north. From Oriental, NC we head to Belhaven, NC and stay at a nice marina called River Forest and explore the town. It is one of the few stops along the way where we have seen a town improve since we last visited it 6 years ago bringing Silver Maple down the coast.

Silver Maple (right) on the dock at River Dunes in Oriental, NC

Osprey keeps an eye on us as we depart from Oriental, NC

Bouncy ride on the way to Belhaven, NC

Randy at the River Forest Marina in Belhaven, NC with Silver Maple on the dock behind

This is the River Forest Marina and event center in Belhaven, NC. Clearly, not your typical marina!

The  next morning we head towards the Pungo-Alligator Canal and Alligator River. When we get to the Alligator River Marina, we meet a nice couple, Sophie and Stephane from France on their trawler named Troll. We have cocktails together and then meet them for dinner again at our next stop in Coinjock, NC. 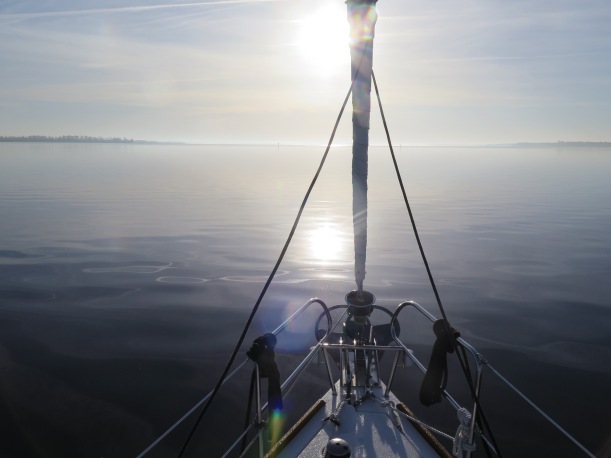 Water is red/brown as if there is blood in it

Coast guard does a fly-by

When we exit the canal and enter the Alligator River, the wind picks up and so the sails go up too. Yeah! 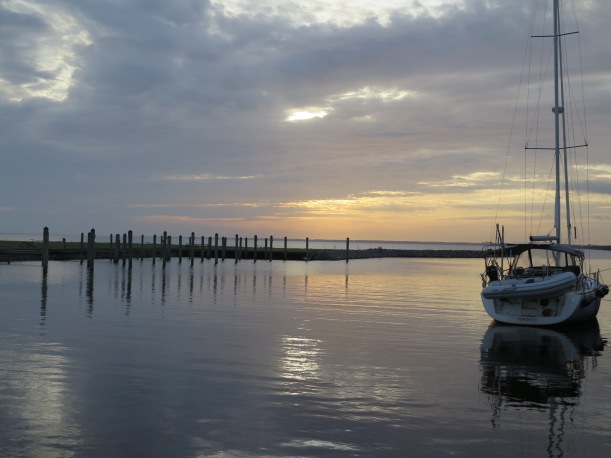 Silver Maple at the Alligator River Marina at sunset 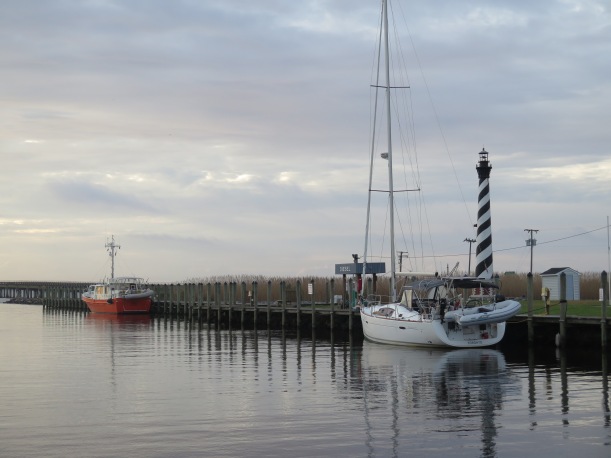 From Coinjock, it is on to Portsmouth/Norfolk, VA marking the end of the Inter-Coastal Waterway (ICW) and the Carolinas. It is a beautiful calm day with Ospreys nesting on almost every channel marker. But, it is a hectic managing the timing of multiple bridge openings and a lock, so we are pushing Silver Maple’s engine hard.

We spend a day in Norfolk exploring and waiting out bad weather, then carry on to our next stop at Deltaville, VA. In Deltaville, the weather turns bad again so we stay put for a few more days before heading to Solomons, MD. The Chesapeake Bay is cold, windy and wavy both days we are on it. Heading to Annapolis from Solomons, our last day on the water is probably our roughest day yet.

Flying away as we approach

Watching us from the tree as we go by 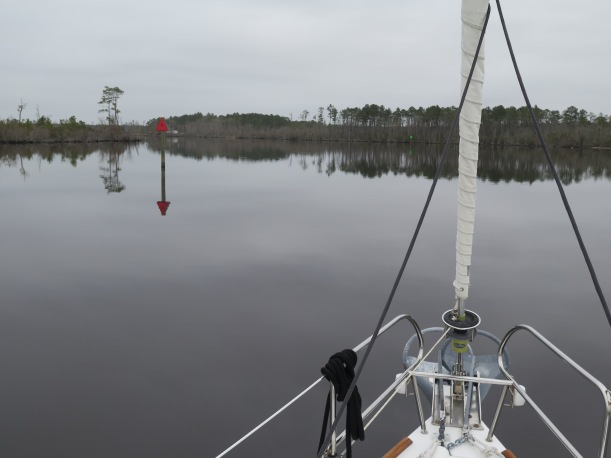 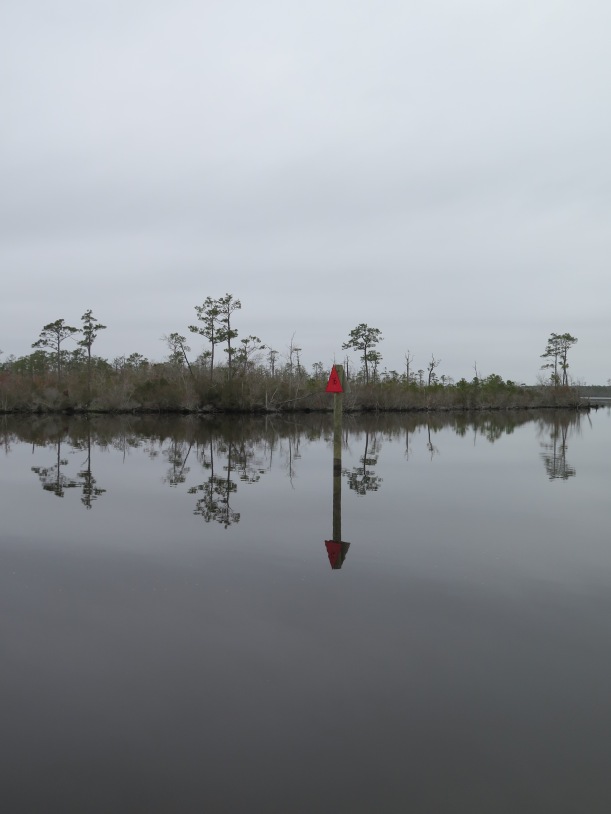 You can take the boy out of the country, but…

Working on an Aircraft Carrier 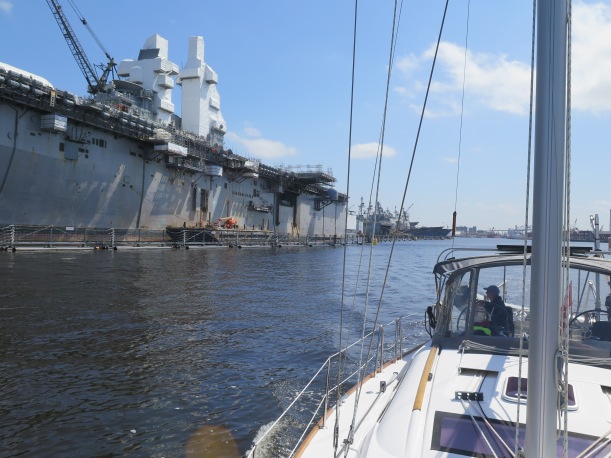 In Portsmouth, VA the town across the river from Norfolk

The city of Norfolk, VA from across the river

Silver Maple on the dock in Portsmouth, VA at the Tidewater Marina

This little guy spends a lot of time looking up at us over the rails of Silver Maple on the dock. Apparently, he has learned that people on boats feed him, so of course we do!

Ferry to cross the river from Portsmouth to Norfolk

Lee and Randy on the ferry 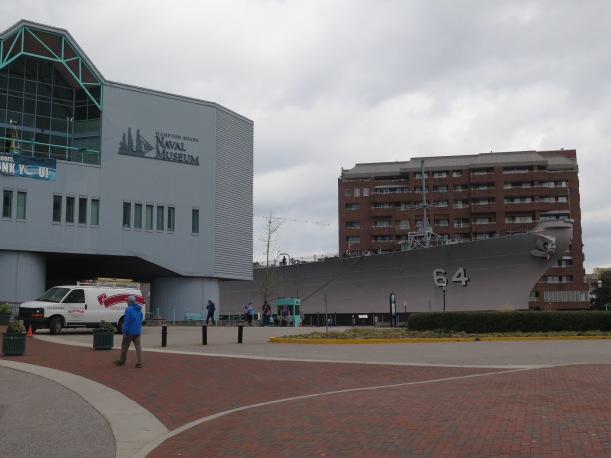 Approaching the Nauticus and Naval Museum with the Battleship Wisconsin 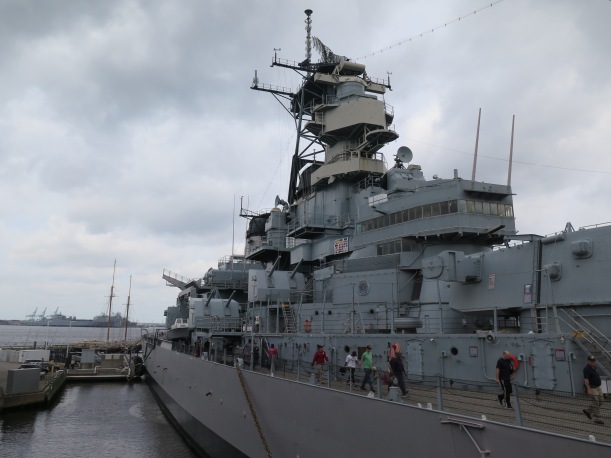 Tomahawk missile launcher on board

From the ground it looks even bigger 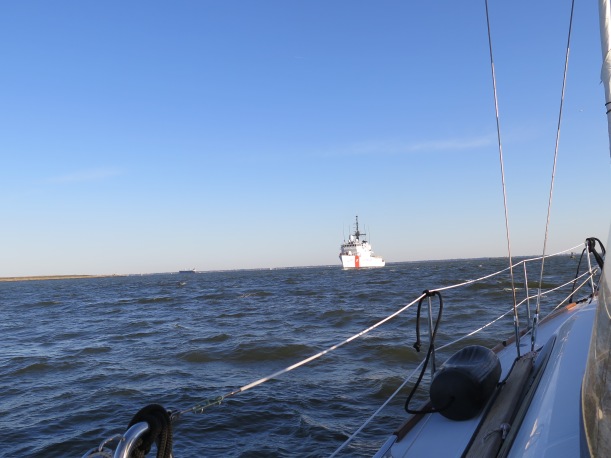 Leaving Norfolk and heading out towards the Chesapeake Bay

We get passed by this strange looking military vehicle. Amphibious? 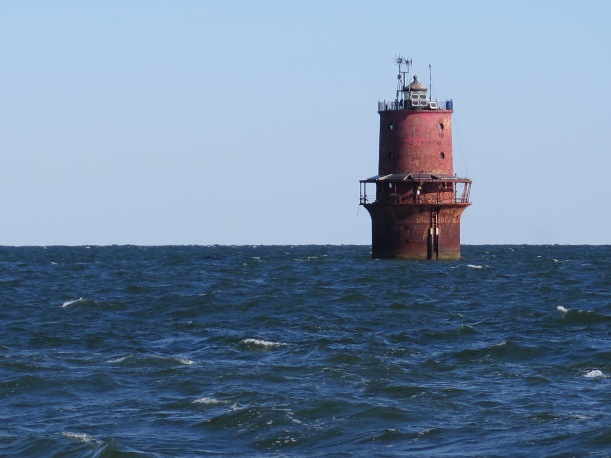 Busy shipping channel on the Chesapeake. We have to change course to get out of this guy’s way… 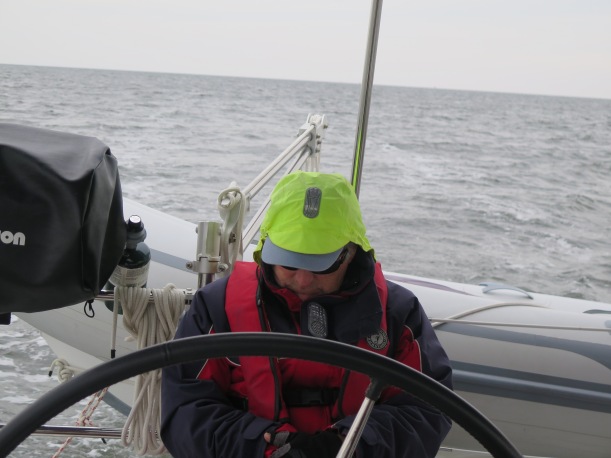 Captain takes a little nap at the helm

Silver Maple on the dock at Zahniser Marina in Solomons, MD

When we get to Annapolis, MD, we take 4 days to pack up all of our belongings and move off of Silver Maple. Our friends, Ruth and Bruce drive down with their trailer from Canada. We load it up and say goodbye to Silver Maple. The drive home is a bit treacherous with snow and freezing rain.

Randy packing up the storage locker 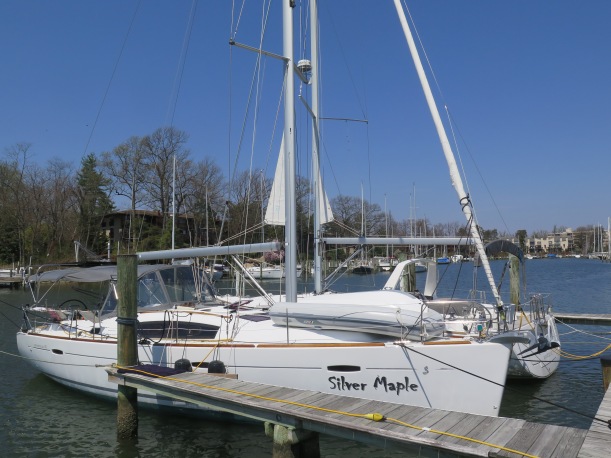 The harbour has sailboats as far as the eye can see…

Ruth and Bruce to the rescue! They drive their truck and trailer down from Canada to get us.

Out for dinner in Annapolis with Ruth and Bruce. Happy 34th Anniversary guys! 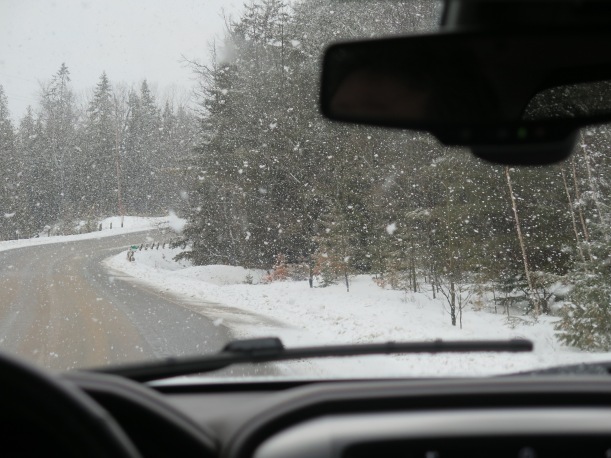 Winter wonderland at home when we arrive. Perhaps we are home too early…

Randy gets the tracter out to clear the snow 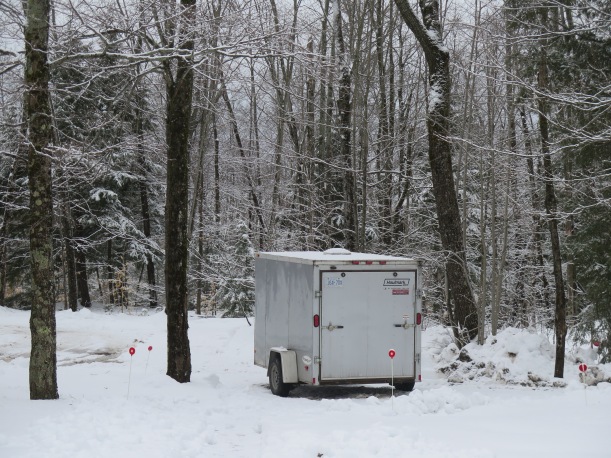 Now back at home, winter is still in full swing. Lots of unpacking to do to keep us busy until spring arrives. Which, hopefully, will be sooner rather than later…

We are living the dream. Thank you to all the great friends and family we share it with. Hugs to you all!